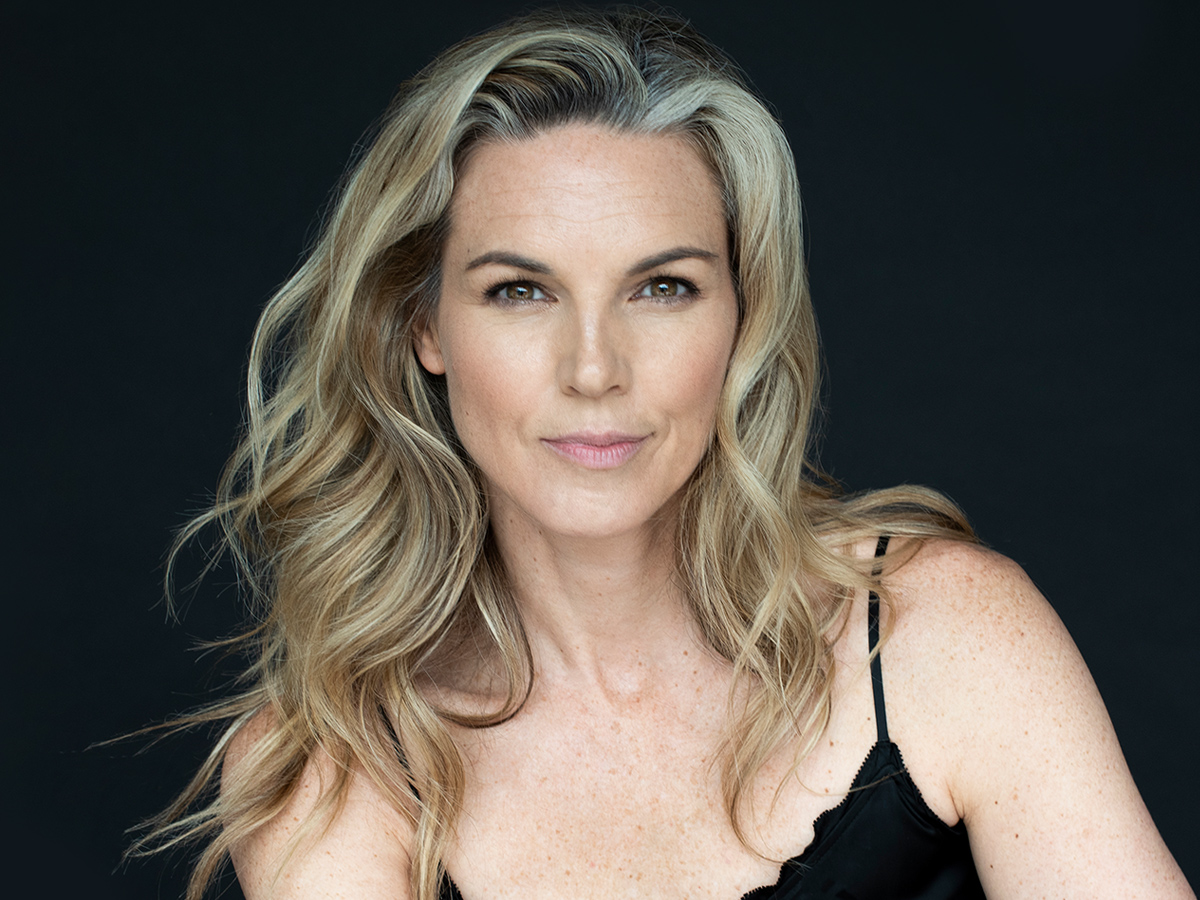 Kate Drummond is an award-winning Canadian actor with an incredibly inspiring backstory.

Drummond spent twelve years as an elementary school teacher. One day she was teaching a lesson on Dr. Martin Luther King Jr.’s iconic “I have a dream” speech. Her students started talking about their dreams, hopes and aspirations. An eight year old student asked Drummond what her dream was.  She answered that besides teaching, she’d always wanted to be an actor. The student replied, “Well then why aren’t you doing it?”

That moment changed everything for Drummond. She realized she needed to stand behind her words and practice what she was preaching. She asked for a leave of absence from her teaching position so she could prove to her students that anyone can follow their dreams. She decided to leave Ottawa and the secure, comfortable life she’d built for herself to pursue an acting career in Toronto. It wasn’t an easy transition, but she persevered. She took classes and learned from various mentors. She went to countless auditions and after months of struggling to make a dent in the industry, she started booking roles and has since gone on to do films, television shows, video games and voice-over work. Wanting to expand her experience as a storyteller, in 2016 she also co-wrote and co-directed her first feature film,  Go Fish.

Since changing careers nine years ago, Drummond has appeared on TV programs such as Wynonna Earp, Heartland, Saving Hope, Dark Matter and has starred alongside Brooke Shields in the Flower Shop Mystery series. This month, she can be seen in Lifetime’s Trapped: The Alex Cooper Story and going forward, audiences can watch for her in Apple TV’s Ghostwriter (premiering in November) and CBC Gem’s Utopia Falls (coming in 2020).

She spoke with us for Go Magazine about persistence, the value of maintaining a beginner’s mindset, freely sharing knowledge and more.

You have a tweet pinned to the top of your Twitter page that says: “Before you quit… do just one more thing to enhance or improve yourself in whatever it is you plan on quitting … & then see. Resistance and the urge to quit is strongest right before the moment of breakthrough. It’s hard to hold on. But give yourself just one more chance.” That’s a really great piece of advice. Can you tell us more about it?

I think there’s a misconception that if you have a passion for something and a dream that you’re aiming to achieve, that it should be easy and should always feel good. It’s not true. The road is jagged and rocky, but I have learned that if I keep taking even the tiniest steps forward, that I’ll get through those tough times.

I try to look at the really difficult times, when I feel like I just want to pack it all in, as a test from the universe. It’s like the universe is saying to me, “How badly do you want this? Because we need you to be so strong and ready for when it happens. So, we’re going to put you through these little tests along the way, and if you’re going to take your ball and go home when things get tough – then you’re not ready for your big dream.” I know it might sounds silly, but that’s how I try to view every obstacle or set back that comes up. I try to remind myself that it’s not rejection, it’s redirection. It doesn’t mean no, it just means not this way or not right now. During times when I’ve wanted to quit the most, out of sheer stubbornness I’ve made myself keep going and given myself another chance, and then literally – within days – everything changed for me.

Your schedule as a full-time teacher was very structured and likely very different from your schedule as an actor. During downtime between acting gigs, how important is it for you to keep practicing and studying your craft?

It’s very important to me to always train and dig deeper in my work. For actors, our craft needs to be a daily practice just like musicians, writers or athletes. That way, when we do get the call to work, we’re ready to go. When you get hired for a job, it’s not time to start getting warmed up. You’ve got to already be in that prepared place. When opportunity knocks, it’s not just about being in the right place at the right time. You also have to be ready to open the door and have your suitcase packed. If you get lazy and forget to pack your suitcase, you may not get the job. I recently shot 10 episodes of a show and the opportunity came quickly, and seemingly out of nowhere. Thankfully, I was ready.

At this point in your career, do you find yourself still actively seeking out opportunities to learn more about acting, writing and directing?

Oh, yes – always, always, always, always! I always want to better myself and find different ways of being more truthful in my work. Learning from others and taking classes is something I recommend to actors no matter what level they’re at. There’s always something to learn. There’s always someone to be inspired by. I’m curious about so many things – about how the art form is changing, about what other actors are doing, about the state of television programming and what is connecting with audiences and what’s not. I’m always an advocate for being in class and I also get coaching. I like to learn more about what goes on behind the camera as well. I love to understand what every person on set does. It just adds to the appreciation and understanding that without every single person doing their own job, these stories wouldn’t be told. Truly it’s a village that brings a story to the screen, not just the actors.

As a former teacher and someone who is a big proponent of lifelong learning, do you try to create teachable moments for others?

I don’t think I’ve ever really made peace with leaving my teaching career because it’s not something that I ever expected to do! I loved teaching and because of that, whenever I have the opportunity to coach or help someone, I take it. I do public speaking and have talked with drama classes about my transition from teaching to acting, or how to keep your faith and what it looks like to be self-empowered and self motivated. I love seeing the lightbulb go on in the eyes of our youth. And on sets, if a newer actor asks me something like, “How did you prep that?” I say, “Meet me at lunch. I’ll show you everything I know. Everything that has been passed on to me, I’ll pass it on to you.”

I don’t feel any need to hoard knowledge. Knowledge can only make us all better as a collective. I’m always looking for an opportunity to help someone see something more clearly, work through a problem or to face their own motivational challenges. I’ve had so many people in my life who have shared their expertise and knowledge with me.

Like you, we really believe in sharing knowledge. The more all of us know, the easier it is for everyone to go forward together.

It’s so true. Collective knowledge is empowering. We are stronger and smarter, together.

I had a tremendous experience with this as an actor during the filming of the movie Nowhere to Be Found last year. My co-star was an actress who had been in the industry much longer than I had. The movie was a huge deal for me for a couple of reasons. It was my first leading role but also, I had recently lost my dog of 13 years. I was trying to navigate so many feelings – nerves, grief, excitement. So, I approached my co-star, who’s now one of my closest girlfriends, and I said, “I have never been the lead of a movie before. I’m a bit overwhelmed. Along the way, if you have any tips, advice or anything you could help me with, I would love and welcome that.” She hugged me immediately and became my biggest ally and support during that movie. On our off days, we were auditioning for the exact same roles on television shows and helping each other prepare. For me, that collective spirit of learning from each other and helping each other was amazing.

I think it’s important to stay humble and to approach each day with a beginner’s mindset. It takes off the pressure of trying to prove ourselves to anyone. I  am who I am today with the skills I have, but what else can I learn? If I’ve got my walls up or my ego gets in the way and I think I’ve already got it all figured out, then there’s no room for personal growth. I think the smartest people I know aren’t afraid to say, “I don’t know,” or “I don’t have that answer.” I try to follow their lead.

Kate, thank you for sharing so much great insight with us. Before we go, we wanted to ask you if there’s anything you’d like to see changed about the world of insurance?

I’ve always had house, car and health insurance so everything’s been very taken care of but the one issue I have in terms of health insurance in general, is that I wish there were more resources allocated for mental health support. I’m always amazed that we have so little coverage for it, when truly, our mindset and mental health is as critical as our physical health.

You can learn more about Kate Drummond on her official website here. You can see her starring in Trapped: The Alex Cooper Story which premieres on September 28 on Lifetime.